The Ontario Goat Advocate Award is bestowed yearly upon members who demonstrate a passion for the goat industry and show a commitment to bettering it. This year, Ontario Goat recognize two farms- one meat and one dairy – for this award.

Anna Haupt & Mark McCutcheon are fantastic advocates for the goat industry. They raise meat goats and run Teal’s Meats, a successful
meat processing business. They promote Ontario goat meat at local markets, educating the public about adding chevon to their diet, the
nutritional benefits and how to prepare it. Anna recently served on the Canadian Meat Goat Association Board of Directors and established the CMGA’s youth point chase competition. She’s dedicated a lot of energy to promoting youth involvement and interest in the goat industry. Anna & Mark have left no stone unturned when researching nutrition, husbandry, and genetics to improve their meat goat herd. They’ve won many awards in the show ring and have been awarded CMGA’s Show Champion of the Year. They participate in Type Evaluation, performance testing and health testing which is a great example to fellow producers and also shows their dedication to improving their breeding program. Most recently, Anna & Mark hosted Andrew Campbell for his weekly “Dinner Starts Here” farm tour video, opening their farm to the world to help educate Canadian consumers on the meat goat industry. Both Mark & Anna are wonderful advocates for the industry sharing positive and educational content on social media about local food, farming, agriculture, and meat goat production.
Congratulations to Anna & Mark. The industry is lucky to have you on its side.

This year’s Ontario Goat Dairy Advocate Award was given with great appreciation to Ed Donkers. 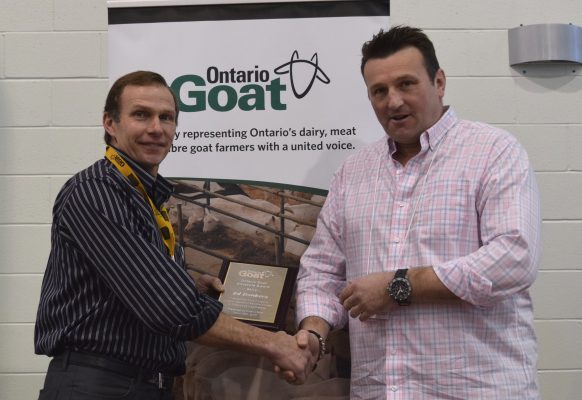 Ed, in many ways, has become the face of the Ontario goat industry this year. Ed has given generously of his time, farm, goats and acting skills to help OG create videos and photo resources to be used in industry education and promotion. OG’s farm tour video, featuring Ed & his farm, was released in April 2016 and has racked up an impressive 80,000 views. Ed has been through a crisis situation and amazingly came out the other side and stronger than ever. He turned his tragic barn fire into an opportunity to rebuild and advance his operation. He then turned around and shared his story and the many things he’s learned since and has become an advocate for the goat industry taking speaker training and doing a number of media interviews promoting the goat industry. Ed finished his term on the Ontario Goat Board of Directors last year, but has continued to be one of the industry’s loudest and proudest advocates. Ed is putting in a lot of work to get his farm ready to host Farm & Food Care’s Breakfast on the Farm event June 24th. Over 2000 guests are already registered to visit Ed’s dairy goat farm for breakfast and a tour. It’s sure to be a great event that will introduce goat farming to urban families and get lots of positive media coverage.
Congratulations Ed and thank you for all you do!