You Can’t Manage What You Don’t Measure 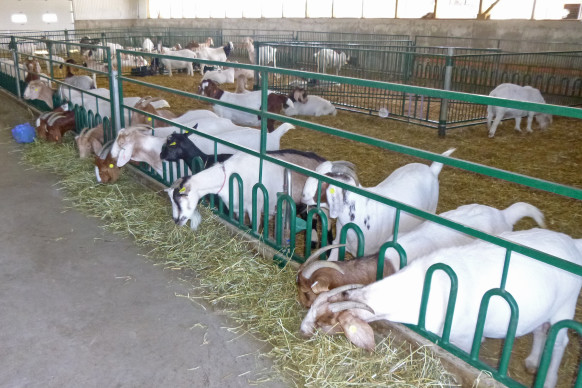 Click here for a PDF of this issue of the Goat Gazette.

Keeping good records can be a key to goat farming success. Not only do records help you keep on top of production, feeding, and profitability, they also ensure you’re meeting food safety and traceability requirements. Most importantly, though, they’re a great tool for continuous improvement of your herd and your farm.

Although record-keeping differs from farm to farm, it doesn’t have to be a complicated under-taking. It can be easy to get started – and the benefits will soon start making the efforts worthwhile.

From the farm – a goat herd record-keeping system in action

Peter and Amy Vingerhoeds have a growing 100 doe commercial Boer-cross herd on their 100 acre South Huron-area farm, where they’ve lived with their four daughters since 2001. Goats are a family affair for the Vingerhoeds – they’ve all been involved as members and volunteers with the Huron County 4-H Goat Club. Peter also works as a nutritionist at their livestock premix business, BSC Animal Nutrition, in St. Marys ON.

For ten years, they ran a small hobby herd of commercial Boer-cross goats, keeping only limited records of feed and supply purchases, as well as livestock sales. While the herd size ranged between 20 and 30 does, the family identified most animals by their unique colours and personalities, and kept replacements based on conformation.  When they built a new, naturally ventilated barn in 2012, expanded the herd and transitioned to year-round kidding in full confinement, record-keeping became increasingly important.

First, Peter wanted to get a really good handle on production capability:  tracking genetic lines, calculating average daily gains, and determining feed and production costs per kid and per doe.

Second, their herd tested negative for Caprine Arthritis Encephalitis (CAE) and Q–Fever, and as they made the decision to populate the new barn with their own stock, Peter and Amy needed doe production and health records to select the best replacements and cull lower producing animals.

The starting point was identifying each goat with management ear tags. Amy then made a habit of recording all birth information in the Lambing Diary available from the Ontario Ministry of Agriculture, Food and Rural Affairs (OMAFRA), a pocket sized notebook with room for over 120 kiddings – an easy and inexpensive step.

By participating in the Pilot Traceability Project with Ontario Goat, the Vingerhoeds also tested RFID tags, and collected benchmark weight data at zero, 50 and 100 days. Amy designed spreadsheets in Microsoft Excel which allowed her to easily record weights customize recordkeeping to their operation.

In the Vingerhoeds’ operation, groups of 15 to 20 does are penned by age and gestation stage, so Amy prefers to see all the goats in one pen on a single page, one row of information per goat. Spreadsheet cells contain animal identification, sires and dams, vaccination status, health issues, and hoof clipping dates as well as blank columns where additional information can be recorded, like breeding and kidding dates, pregnancy checks, arising health issues, updated vaccinations etc.

As each kidding season passes, the blank boxes fill up with handwritten notes, and jobs are highlighted as they are completed, making it easy to pinpoint the last few goats that still need to kid or have hooves trimmed.

Finally, the Excel files are updated and a new page is reprinted for each pen for the next kidding season.

How record-keeping has made a difference on the Vingerhoeds’ farm

Since implementing their record-keeping system, Peter and Amy can better define how management changes are impacting overall herd production.  This is what they say:

For more information on record-keeping for goats along with template forms, consult the Ontario Goat Best Management Practices Manual, or contact us.