Disbudding is one of the most disliked chores on goat farms. However, it is also an important part of preventing injuries to other herd members and handlers.

Goats develop horns as defense against predators and use them to fight to establish a social rank in the herd. When goats are housed indoors, they no longer need horns as a defense from predators and fighting for a social rank can cause injuries that result in lost production and decreased welfare. Further, horns can become stuck in gates or fences, causing injury, death and/or destruction of housing. For these reasons, most commercial dairy goat producers disbud (destroy tissue that later becomes horns) kids at a young age. Disbudding is less common on meat and fibre goat operations, but meat and fibre goat producers who disbud should follow these same guidelines.

At three weeks of age, the developing horn tissue begins to attach to the skull of the goat and a small nub of horn can be seen and felt. Once this occurs, removing the horns becomes more difficult, requiring a more complex technique to ensure success and avoid scurs (incomplete horn growth caused by unsuccessful disbudding/dehorning).

Removing horns once they have attached to the skull is called dehorning and should be avoided as much as possible. Dehorning is an invasive procedure that carries more risks for the goat. Producers are encouraged to properly plan and time disbudding to avoid the need to dehorn older kids or adults.

Adult goats with horns or scurs should not be dehorned if it can be avoided. If an adult goat with horns is causing injury to other animals, handlers, or becoming stuck in housing components, first aim to manage the goat to reduce the issue, perhaps by segregating horned goats from hornless or modifying housing features that goats can become stuck in. Removing horns from adult animals requires a veterinarian to administer anesthesia, leaves the skull open to infection and infestation by flies and maggots, and causes a lot of bleeding. Banding horns is not recommended, as the process can take up to eight weeks and cause pain for the length of the process. A goat in pain is not a productive goat. Nip these problems in the bud by disbudding when kids are young!

In a 2008 study of the United States and Canada, it was found that 97% of veterinarians and 95% of producers used hot iron disbudding. No one in the survey reported using caustic paste. This is likely due to the fact that caustic paste works well for individually housed calves but kids are housed in groups, increasing the risk of injury by rubbing paste onto other kids.

Across many livestock species, it is now widely accepted that disbudding, while necessary, is a painful procedure. For example, best practice for disbudding calves includes both a local anesthetic to numb the hornbud area and prevent the initial acute pain caused by application of the hot iron, and a long-acting NSAID to provide pain relief once the local anesthetic wears off to reduce the pain of the burns. This protocol makes handling calves during disbudding much easier and calves return to normal behaviour (such as eating, drinking, and resting) much sooner than calves disbudded without pain control, who display more pain-related behaviours. Calves that are eating and resting normally after disbudding will be more productive than those that go off feed and don’t rest due to pain. Studies have found calves given pain control consumed more feed and gained one kilogram more per day than calves disbudded without pain control. 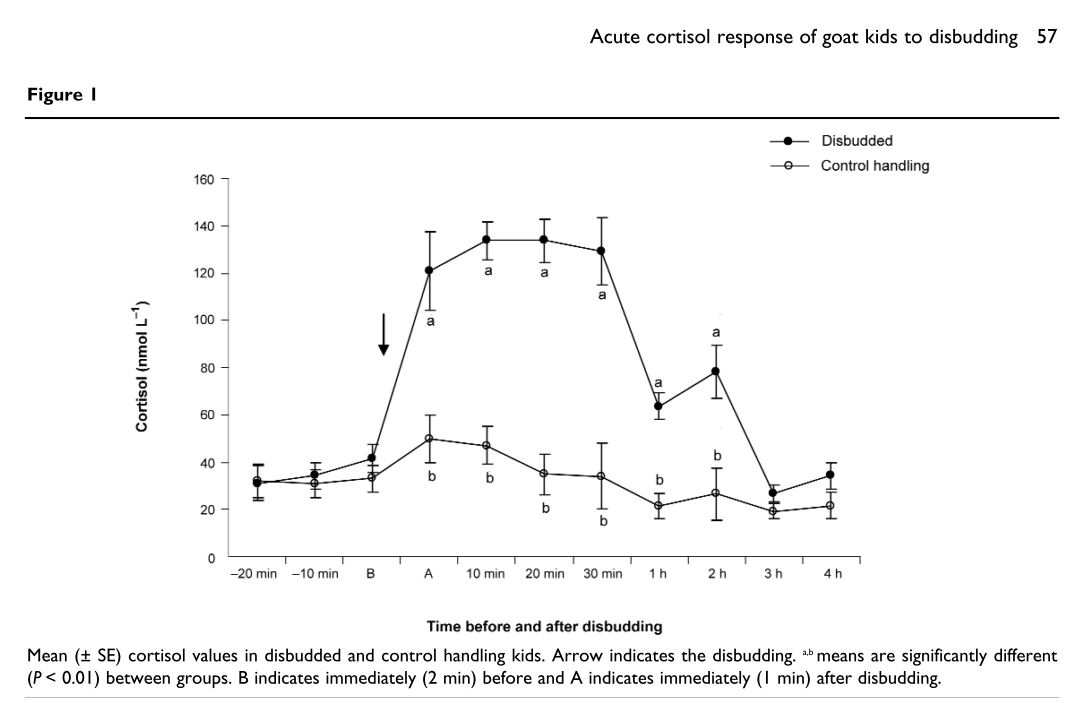 (Click to enlarge) L Alvarez and J Gutiérrez compared cortisol (a stress hormone – higher levels mean more stress) levels between kids who were hot iron disbudded with no pain control and those who were not disbudded but handled in the same way. It was found that there were significantly higher cortisol (stress) levels in disbudded kids for at 2-3 hours after disbudding. Further, disbudded kids showed greater high-intensity vocalizations and kicking during disbudding.

There is a large amount of research demonstrating that calves experience pain from disbudding and pain control improves welfare and productivity. This research in goats is still ongoing. However, with the current research, it is safe to assume goat kids experience pain when disbudded without anesthetic and would benefit from pain control in terms of reduced pain and faster return to normal behaviour.

Livestock species that require the use of pain control when disbudding, as per the National Farm Animal Care Council’s Codes of Practice for the Care and Handling of Farm Animals.

While goats are especially sensitive to anesthesia, and care must be taken to avoid a lethal overdose, safe and effective routine pain control for kids at disbudding can be done and will make disbudding less stressful for both people and goats.

Goat producers should work with their veterinarian to develop a pain control protocol to use when disbudding kids. The protocol should include a local nerve block as well as a long-acting systemic pain control. The local nerve block reduces the kid’s ability to feel the hot iron during application, and a systemic pain control helps control pain once the local nerve block wears off. In the 2008 survey, 42% of veterinarians provide training to clients who wish to disbud kids themselves. Unfortunately, 69% of surveyed veterinarians provide analgesic when hot iron disbudding, while only 33% of producers do so. To improve welfare and increase public confidence in the Ontario goat industry, it is recommended that all kids receive analgesics at disbudding.

Once you have experienced the difference between hot iron disbudding a kid without analgesics and one with analgesics, pain control will become a standard part of your disbudding protocol. Goat kids who are given pain control at disbudding may still object to handling by bleating, but properly nerve blocked kids will not bleat more intensely and loudly when the disbudding iron is applied. It is this loud, intense bleating that, for many, makes the process of disbudding a dreaded task.